You are the cleaning lady at a school, stuck in the mundane life of keeping it clean. So make the best of it and armed with your trusty tools (water gun, broom, and mighty trash bags!), do all you to keep it the cleanest school in the city!

Nice job with the game design, sound effects, and animation! Its satisfying cleaning everything up, and it was difficult enough that I didn't get it all the first day which feels fair. The edge cases get cleaned up by each day cycle too which is nice.

A couple details I would be interested in seeing in the future:

Trash Bag Weight: Does the trash bag's fullness do anything, except limiting how much it can hold? I seemed to always run at full speed even when carrying something, and I would have more incentive to throw trash bags all the time if it helped me run faster. Then if there were more places to dump trash, I could aim at those places too if that is something you want to do with your game design.

Less Broom Teleportation: I can drop a broom on the other side of a wall, then not be able to pick it up without walking around the wall, which was kind of funny.

Infinite Doorway: Lastly, the front entrance does not have an invisible wall, so you can throw trash bags to fly off-screen, or drop your broom out of reach, which fixes itself on the next day's reset. This could also turn into a feature if you want to add windows to throw trash bags outside of the building in different ways.

I've never had this much fun cleaning! 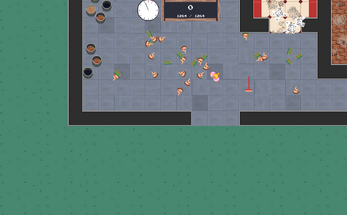 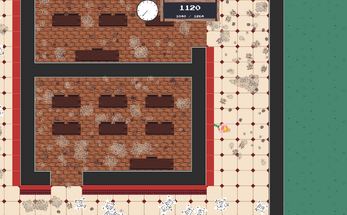 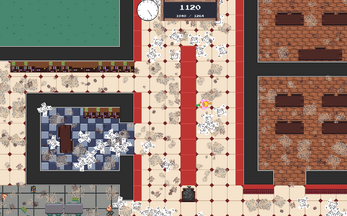